Directed, written by and starring Isabella Rossellini, these five two-minute portraits explore the unconventional seduction rituals of creatures ranging from bugs to cuttlefish. SEDUCE ME offers an entertaining yet informative look into the bizarre seduction rituals that often precede the mating process

These  beautiful and witty shorts  feature shadow puppetry and papercraft  sculptures/puppets alongside a live actress(Isabella Rossellini) in animal drag.
To see the entire series on the Sundance Channel go here: http://www.sundancechannel.com/greenporno/
Posted by Voice 4 Vision Puppet Festival at Sunday, February 27, 2011 No comments:

2009-THE SUSPENSE FESTIVAL IN LONDON: WHAT OUR PUPPETRY PEERS ARE UP TO IN THE UK

The borough of Islington in London has a reputation for attracting the funky and hip artist types. All along Upper Street, which connects the two tube stops in Islington—the Angel and the Highbury & Islington stops—there is a plethora of pubs, trendy shops, antique markets, and restaurants featuring ethnic cuisine.  Tucked away nearly in the middle of these two stops, just steps away from Upper Street, is a cozy and intimate theatre dedicated to the art of puppetry. Founded by John Wright, the Little Angel Theatre has been operating in an old temperance hall in Islington since 1961. 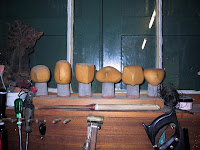 SUSPENSE is exploding the myths that currently surround puppetry in this country, proving that puppets aren’t just for kids.  It showcases a diverse range of contemporary work from UK and international practitioners, bringing puppetry to new adult audiences.
… revealing how sophisticated, irrational, grotesque and potent the art form can be.  The work programmed for SUSPENSE represents not only the changing landscape of puppetry in the UK but a challenge to the way theatre is made – opening new doors of expressiveness.

The sentiment and goals will be recognizable to puppetry practitioners and scholars here in the US as well. While I was there assisting with a production participating in the Festival, I was able to attend three of the shows and one of the two symposia arranged for this event.
It has been nearly twenty years since I have heard ardent discussions about whether or not puppetry can truly be considered an art form or as a craft. I don’t doubt that the question has been raised in the intervening years, but I had mostly moved away from questioning. As a practitioner I had immersed myself in the doing and the making, and there was no longer any question to me that puppetry was an art form. Yet, many practitioners feel a kind of exclusion from mainstream acceptance and keenly feel the absence of approval lent by puppetry being qualified as an art form. While in the UK at the Suspense Festival I once heard this apprehension expressed by a speaker who referred to it cryptically as “the P question.”  Here in the US, there are some artists who work with figures and objects that are reluctant to use the term puppetry to refer to their work. In fact, I have experienced a subtle pigeon-holing myself–that I’m an artist is accepted, yet even amongst other artists who should know better, there is the idea that I am a limited artist who works with a kind of immature art form. With block buster Broadway hits like The Lion King and Avenue Q occurring in a medium that is reserved for mainstream culture and maximum income potential, it seems that puppetry has arrived as an economic art force, but I’m not sure we have had lively discussions about what our art form has to offer that truly sets it apart from any other art form. These were the kinds of dialogues that the Suspense Festival hoped to encourage with its offering of symposia, lectures and workshops organized as part of their presentation of artists and works to the London public.

Penny Francis, co- author of A History of European Puppetry writes in her Animations Online article, What is an artform? :

Does the prevalence of good manipulators and good makers make puppetry an art form? No, because art is transcended craft. The craft of puppetry needs to produce its artists to qualify. ….Art is a transformation of craft, craft in the hands of a genius, coming from nowhere, out of reach of anything that can be taught. He or she trails inspiration and reveals perceptions which make us gasp and see the world afresh. 'Art makes the stone more stony'. [1]


The last show I was able to attend was TAMTAM Objektentheatre’s production of to have or not to have. Here at last I was able to enter into that transcendence of artistry that Penny Francis refers to as a goal. It wasn’t without my own personal reservations: for me there was more animation in the puppeteers than was necessary and I found it distracting. The world created by Gérard Schiphorst  and Marije van der Sande was so meticulous, detailed and mesmerizing that I had no need of the additional commentary provided by the puppeteer’s performance behind the objects. The story a rather simple one—

--provided ample imagery and enough plot with an addition of the wonder that is evoked by the found object that becomes character and lives. When I entered into this world, agreeing to suspend my disbelief, I became involved in an internal relationship with the events unfolding before me, which was heightened by the environmental sound score and spare, but meaningful, vocalizations. This was a performance that provided me with an opportunity—by leaving enough room for my own thought—and yet simultaneously, enough detailed information through expert manipulation and characterization—to process and use the artist’s insight. Possessiveness and territoriality isn’t new, but it is interesting and new to see it developed in this other world on these otherworldly creatures; a pair of pliers, a rusty mouse-trap, utility scissor birds and a few other found objects were the cast for the piece.  TamTam reminds me what I strive for in creating works for puppet theatre and re-inforces my personal goals as an artist working in the field of puppetry.
In New York City, where I live, Sarah Provost and I have been on a similar track with the Voice 4 Vision Puppet Festival.  Though not as large as the ambitious Suspense Festival, we too have been seeking to create community amongst our peers in NY, to bring audiences together with emerging as well as established artists, and to provide a venue that will encourage artists to create full length works for puppetry for adult audiences. Without a venue to regularly produce full length works, many artists won’t have an opportunity for the growth in their work that only comes by burning through the fire of creating a work and mounting it for audiences. And, we hope that over time, the Voice 4 Vision Puppet Festival will have ignited the impulse to excellence in these emerging artists.
Jane Catherine Shaw has been creating and performing in works for puppet theatre for over 20 years. She has performed in Europe and Asia as well as the US, and has premiered her original work at La Mama ETC in NY. Currently she co-curates the Voice 4 Vision Puppet Festival, now in its sixth season at Theater for the New City in New York.
Works Cited
Francis,  Penny. 2004 Animations Online, Edition 6 Winter 03/04.  What is an artform?.  Web. 13 Nov 2009. http://www.puppetcentre.org.uk/animationsonline/aosix/featureartform.htm
Little Angel Theatre. Web. 16 Nov 2009. http://www.littleangeltheatre.com/lat/
Suspense . Web. 13 Nov 2009.  http://www.suspensefestival.com
[1] In the same article Penny Francis reminds us, “Puppetry can be taught as a craft, as to the making and manipulation. There are superb makers and astonishing manipulators. Never decry the great craftspeople.”  In fact, there is a current trend in Craft Theory which seeks a separate identity from art in defining its own singular purpose. See Thinking Through Craft by Glenn Adamson, and A Theory of Craft by Howard Risatti for more information about Craft Theory.
Posted by Voice 4 Vision Puppet Festival at Friday, February 25, 2011 No comments:

Penny Francis, co-author with Henryk Jurkowski of both A History of European Puppetry: From Its Origins to the End of the 19th Century, and History of European Puppetry: The Twentieth Century, tirelessly writes and lectures about puppetry.(Both books are great resources, by the way.)
Here are some excerpts from a lecture given at LATVIJAS JAUNĀ TEĀTRA INSTITŪTS during the Homo Alibi festival, August 27, 2008. The entire article can be found at: http://www.theatre.lv/en/index.php?parent=215

“Puppetry’s rise to the mainstream in theatre can be mainly attributed to the rise or the return of the public’s interest in a theatre that offers as much visual and musical enjoyment as verbal. It may be termed a ‘Total Theatre’ since it draws on a plurality of performance disciplines and resources.….. According to Mario Kotliar, an Israeli writer, theatre has reached the stage of "open composition", in which verbal communication no longer possesses the pre-eminence it had in the past.…. In conventional drama, the spectator is in a recognisable world. Perhaps the content of the play is personal, but its dialectical laws are universal. In visual theatre, however, these rules are suspended and replaced by a private logic, based upon artistic associations; the viewer enters the creator′s mind…. The production, moreover, requires our participation, because visual theatre provokes the audience′s own associations.                        (from Fa Chu Ebert, "Bama", Jerusalem′s Visual Theatre, "Assaph C" 1990, no.6, p.160)”

“The proposed list of criteria for the critic when reviewing and evaluating performance with puppet figures and objects:

Some things to think about......
Posted by Voice 4 Vision Puppet Festival at Thursday, February 24, 2011 No comments:

I propose a discussion group which will read suggested books and meet ( literally or virtually ) to discuss the history and theory of puppetry. Practitioners need to speak the language--or we risk having no voice in the recorded history of our art  as it is in this time.
Interested? Please reply:
Posted by Voice 4 Vision Puppet Festival at Tuesday, February 22, 2011 No comments:

As winter 2011 begins its slow metamorphosis to spring, the V4V Festival comes out of hibernation to begin  preparations for it's 6th Festival to be held in November of 2011. Now a biennial event, V4V remains steadfast in its mission to bring the work of NYC area artists who are working with puppetry into a main-stage venue. Applications will be accepted until April 1st, 2011.


Go to voice4vision.org to the Submit Application page and download the Application and Information. Applications will be available for download on February 25th, 2011.

Voice 4 Vision Puppet Festival
The Voice 4 Vision Puppet Festival is a grass-roots, D-I-Y (Do It Yourself) style, artist-driven festival that was founded by Jane Catherine Shaw and Sarah Provost in 2004. The V4V Festival is committed to supporting and encouraging the recognition of New York-area artists, both emerging and established, who are creating works of merit. V4V seeks to boost the growth of artists by providing a much-needed venue for the presentation of full-length puppetry works. The Festival celebrates and promotes puppetry to New York audiences, and fosters community among artists working within the discipline of puppetry.