Are We In Denial?

When Caroline Eck commented on Gell’s work in her essay Gell's theory of art as agency and living presence response, she wrote:
Most reactions to Gell’s work try to assess the significance of his work to anthropology and/or art history in general; here the merits of applying a Gellian analysis to one particular, but very widespread, variety of art acting on the viewer are considered: living presence response, in which viewers react to works of art as if they are living beings or even persons that act upon the viewer, enter into a personal relationship with them, and elicit love, hate, desire or fear.  Art and Agency offers a new departure to study such responses because it singles out precisely that aspect of the interaction between works of art and their viewers that makes them similar to living beings: their agency, the power to influence their viewers, to make them act as if they are engaging not with dead matter, but with living persons….Art and Agency maps the ways in which indexes make viewers do things (in the widest sense of the word), and this mapping depends heavily on the cognitive psychology of Pascal Boyer. But it does not engage in much detail with the actual experience of the patients of the index. Yet it is precisely the experience of a work of art turning out to be alive, of the creeping awareness or sudden appearance of the inanimate as an animated, living being that defines living presence response, makes it resistant to any form of scientific explanation, and at the same time profoundly unsettling.
(http://www.hum.leiden.edu/research/artandagency/subprojects/deel-proj-eck.html)
Clearly, people outside the field or puppetry are busy looking into the resonances of  objects and their actions upon us. It is troubling to note that we are quickly backpedaling away from the significance of objects in the work that we do, and the question arises; what is the unspoken commentary in this stance? 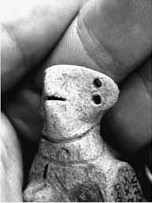 In Prehistoric Figurines: Representation and Corporeality in the Neolithic Bailey examines the uses of figurines through visual culture studies and cultural anthropology, “and investigates the ways in which representations of human bodies were used by the pre-historic people to understand their own identities, to negotiate relationships and to make subtle political points"(Editor/Publisher quote). I would posit that this sounds similar to the explorations of our modern predicament, by modern day artist who work with puppetry. Bailey breaks his study down to the study of figurines in four contexts: as miniatures, as three-dimensional representations, as anthropomorphs, and as representations. He studies the actions that each of these contexts has on the viewer. Their very being as objects–without any movement or textual “story” creates impact on the viewer that can be tested and reported.

Voice 4 Vision Puppet Festival
The Voice 4 Vision Puppet Festival is a grass-roots, D-I-Y (Do It Yourself) style, artist-driven festival that was founded by Jane Catherine Shaw and Sarah Provost in 2004. The V4V Festival is committed to supporting and encouraging the recognition of New York-area artists, both emerging and established, who are creating works of merit. V4V seeks to boost the growth of artists by providing a much-needed venue for the presentation of full-length puppetry works. The Festival celebrates and promotes puppetry to New York audiences, and fosters community among artists working within the discipline of puppetry.